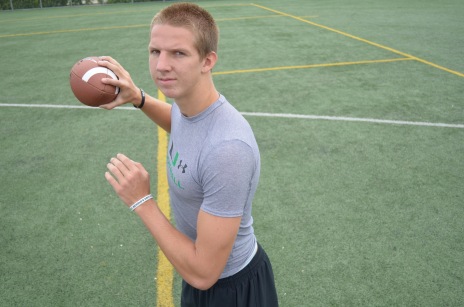 When I first met Tyler Hilinski, he was in the 11th grade at Upland High School. We met in Chino Hills for a team photoshoot and the first thing that I noticed about him was that he called me “Bud”. Not in a disrespectful way, but a cool almost NFL QB way. I would give him suggestions for picture ideas and would just say, “cool whatever you need “Bud”. Over time I almost felt like he was the 40 year old and I was the teenager, due to his maturity and poise.

Tyler Hilinski was and is a special young man. He was not the cocky, “me first” guy that sometimes comes with being a prominent student athlete. Hilinski was just really … cool. The kind of cool where you knew he was the guy you wanted under center if the game was on the line. Tyler was also the guy that you wanted your son to hang out with and your daughter to date.

During a break in our first photoshoot I had a chance to speak with Tyler’s Father, Mr. Hilinski. Like his son, Mr. Hilinski was really easy going and not the super intense sports Dad that we often see with star high school athletes. I could see where Tyler got his easy flow style from. On our 2nd photoshoot the plan was to have Ford of Upland bring a green Ford Mustang for the team to pose with. They were the #1 preseason team and we wanted the picture to make a big splash. I remember it being a really hot day and Tyler’s teammates began to get restless as we waited 30 minutes for the car to arrive. Tyler began to make conversation with everyone and started to throw the football around making the mood light and easy. Tyler was a leader without going out of his way to be one

I choose to remember Tyler as that gracious young man that was so easy to work with. Tyler shares the same birthday as my daughter, who is now two years old. One day I am going to tell her about an awesome young man that she shares her birthday with.

IE Preps Magazine asks that you support Hilinksi’s Hope Foundation and keep his family and loved ones in your prayers. Tyler we will see you soon and we miss you. – “BUD”