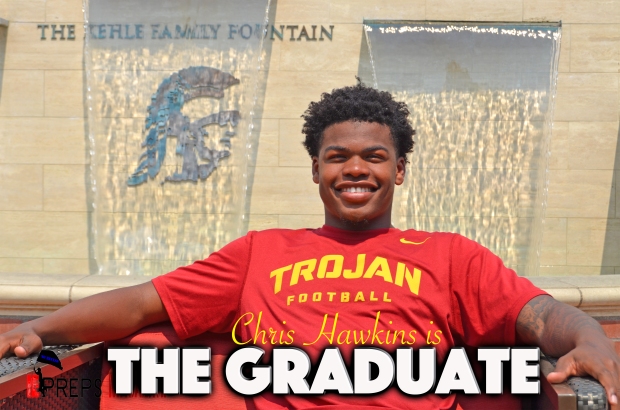 Chris Hawkins, a redshirt junior safety at USC, is making his own way. In a day in age when collegiate athletes have an image as selfish, wild, and immature Hawkins is anything but that. A Class of 2012 graduate of Rancho Cucamonga High School, Chris was a nationally ranked cornerback under Head Football Coach Nick Baiz. Chris along with high school teammate, Tahaan Goodman of UCLA, had his choice of schools to attend at the conclusion of their senior season.

For Chris, growing up in the Inland Empire, making the decision to attend USC was a no brainer. Former USC legends like Reggie Bush and Matt Leinart were heroes for kids growing up in Southern California, and Hawkins was no different. Starting out playing the offensive line in youth league football, it didn’t take Chris long to display his athleticism and IQ. Chris and his brother Armond Hawkins Jr. thrived in Inland Empire youth league football and under the guidance of their father, Armond Hawkins Sr., began to make a name for themselves.

Fast forward to Chris Hawkins freshman season at USC. With his brother playing at the University of Idaho, a feat in itself for two brothers to both play division one football, Chris had to make a name for himself with the Trojans. Younger than some high school seniors, Chris began college as a 17 year old freshman who was smaller and slower than other players on the team. What may have been too much to overcome for some players, was just a perfect challenge for Hawkins. Armond Hawkins Sr., early on taught his sons to be thinkers and hard workers. Chris relied on his father’s teachings to use his football IQ to make up the performance gap on the field. By the start of the 2015 season, a position switch to safety was all that Chris needed to show that he was ready. What took place was a breakout season for Chris, where is hard work in the gym, football IQ, and leadership all came to maturity.

Entering his junior season, Chris is in full command on the field and in the classroom. Hawkins is the leader and elder statesmen of the USC defense and is also a USC graduate. In May of 2016, Chris earned his bachelors degree in Public Policy. A feat that speaks to Chris’ drive and discipline to be a positive example. His education is not over, Chris plans to earn his masters degree from USC by the time his football career is over at USC. In the Inland Empire, Chris along with current and former USC Trojans such as Vianne Talamaivao and Su’a Cravens give hope to high school athletes that they can make it too. Chris also gives back with his time, mentoring aspiring college athletes in the Ground Zero organization that his father created to help high school athletes get to college.

With two full seasons of eligibility left, the future looks bright for Chris Hawkins as a professional athlete and as a professional. Hawkins loves the diverse group of students that he has met in college and feels that it has helped him become a better person and global thinker. Son, brother, student, athlete, teammate, and you now can add the title graduate to that of the talented and wise Chris Hawkins. 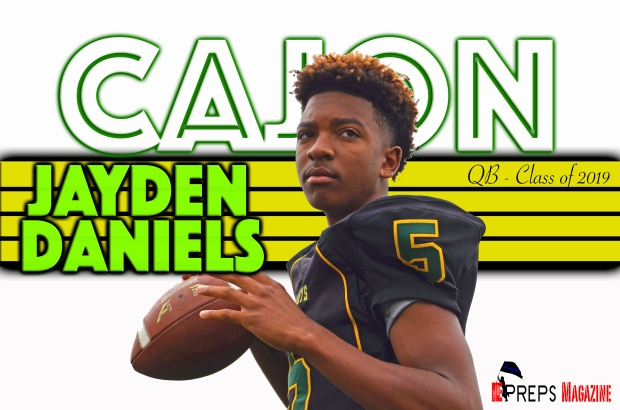 When you hear of the city San Bernardino what are your thoughts? For many it is the tragic shooting attack that took place in December of 2015, poverty, or just crime. Yet for people who live in San Bernardino who know the city’s rich history, the public perception can be hard to overcome. Jayden Daniels, sophomore quarterback at Cajon High School is what the city of San Bernardino is really about… Promise.

Daniels burst on the high school football season last year as a freshman when the Cajon starting quarterback was injured. Head football Coach Nick Rogers wasted no time putting the talented and poised 9th grader in the starting line up. Before Jayden could play, he had to get special waiver to play varsity football as a 9th grader. Once he was cleared, he set the scoreboard on fire. What might seem like a script from a sports movie, was the unveiling of a rare talent that is just getting started.

Jayden Daniel’s promise starts and begins with his parents. His Father and mother are both proud Cajon graduates, where his Dad played football and his mother was a cheerleader. His mother has always required that he give 110% in whatever he does and to never quit once he commits to an endeavor.  From soccer, basketball, and even track Jayden has excelled in sports and the classroom with the same approach of humility and hard work. It has been this mindset that allowed Jayden to step in as a 9th grade quarterback to lead Cajon to a league title last year beating league powerhouse and state football power Redlands East Valley. In a season that was nothing short of amazing Daniels proved that he was not hype but skilled as a true 14 year old freshman. The stats were nothing short of scary, throwing for over 2,600 yards and 35 touchdowns in his debut in high school football. As a smooth and smart quarterback for Cajon, Jayden makes it clear that his ultimate goal is to receive a full scholarship to a Pac 12 school as an athlete.

As college recruiters begin to circle the wagons on Jayden this season, he looks forward to lead his team and school forward. While Cajon High has over the years had lots of amazing athletes and even won a title in girls basketball, the football program has needed their moment. In a day in age where the best football programs have near college level facilities, Cajon’s football program has not been able to keep up. Which is critical because often parents choose whether or not they will send their son or daughter who plays sports to a specific high school based on factors like winning and sports facilities. Jayden hopes that as Cajon football wins more games that the spotlight on his school and city will ultimately change the lens through which people look at San Bernardino and Cajon. 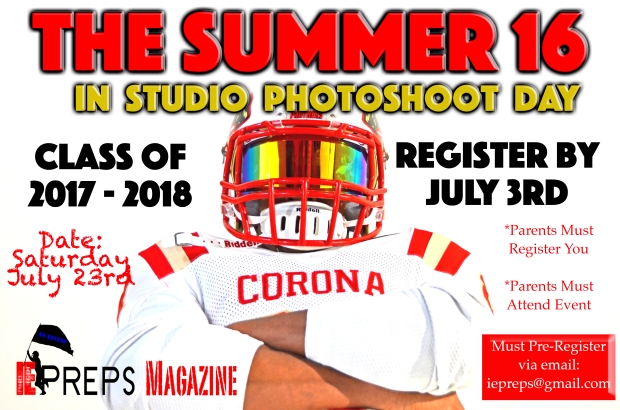 If you are an IE high school football player who is in the Class of 2017 or 2018, make sure you come to this event!

Who will have an opportunity to be in an IE Preps Magazine issue, get great shots taken of you, and much more!

Don’t miss out! Saturday July 23rd. Parents must register via no later than July 3rd. The Basic Registration fee is $60.

Willie Morris of Chino High School is ready this season! Ready to work hard and ready to prove he is the best cornerback in the IE this season. Lofty goals for some people, but Willie is no stranger to the limelight. This prototype cornerback has the size, speed, and confidence to make his goal a reality in his senior year. Willie was already a known name at Chino High soon as he began playing because of his older brother’s exploits in football at Chino a few years prior. Morris has plans to build on his junior season’s success by winning it all under 2nd year head Coach Cisneros.

It is said that if you don’t look good, you won’t play good. With that being said Willie Morris makes sure he is always looking good and playing his best ball. There is a winner’s attitude that good football players must have and Willie feels his team has that winner’s mindset in abundance. As the season approaches with expectations running sky-high, all eyes will be on Chino football and the dynamic cornerback and return man Willie Morris. His GAME is OFFICIAL.

The  1st ever IE Preps Magazine Coach’s Media Day was a huge success! Held on Saturday June 4th, 2016, the event was attended by nearly 30 area coaches and their respective team captains. There were also a bevy of players that attended the media day on their own as invites to the event. Inland Empire players who have received national attention such as Stephen Carr of Summit High, Jaelan Phillips of Redlands East Valley High, and Kyle Gibbs of Norco High were in attendance. The day also featured interviews and photoshoots with the I.E.’s best high school cheer programs with Great Oak, Centennial, Norco, and Oak Hills Cheer teams.

The coaches in attendance got a chance to sit through an engaging Q & A session about their upcoming season, players, and thoughts on hot topics related to high school football. All teams present also participated in a fun photoshoot and video session. Media from this event will be aired throughout the summer going into the season. IE Preps Magazine also used the event to prepare for their big Pre-Season High School football issue that comes out in July.

What was a first of its kind in the Inland Empire has set the tone for what will undoubtably be a bigger and better event next year in 2017. Special thanks to all of the coaches, players, parents, and IE Sports Net for making time to come out to this event.