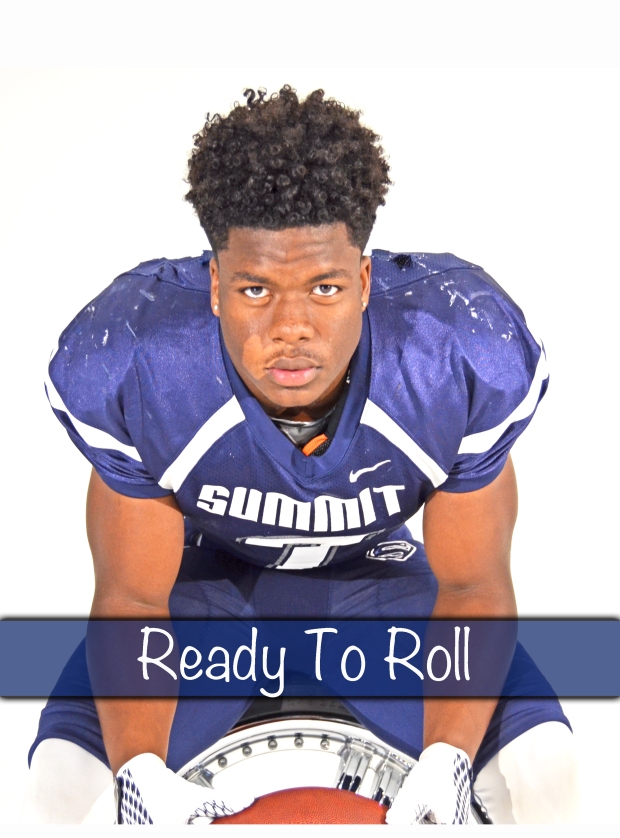 From the time Stephen Carr stepped on a football field he was running. At first as a little kid, he ran in all the wrong directions. As time went on he learned to run the correct directions and thrive. Eventually as a standout in Fontana youth league football, the other Stephen Carr took notice.

Stephen Carr Sr., the father of the nationally ranked Summit football star, was watching his 9 year old son son play football when other parents approached him. “They told me that my son Stephen was really good and that he could be special” says Stephen Carr Sr. Stephen Carr Jr., whom the family calls “Booda”, became a star playing for the Fontana Wolves, Grizzlies, Gators, and Bucks. “I have no idea where he got all of that ability from”, says Stephen’s mother Shonnda McCullough.

Everything was perfect in Stephen Carr Jr. ‘s life, but when he turned 12, the family learned that Stephen Carr Sr. would have to serve a 5 year prison term. “It was hard for me, but Stephen and his siblings brother Dakari and sister Shanelle were strong for me”, says Stephen’s mom. “We made it through that time just sticking together as a family and staying positive. Stephen’s grandmother, Jackie McCullough, was also a big help with us during that time.” says Shonnda.

Even with the harsh reality of life hitting Stephen at age 12, he continued to be the same respectful son at home. Where most young people become angry at losing their father Stephen did just the opposite through keeping a good relationship with his Dad. By the time Stephen began high school at Summit he was already a well known athlete and people expected big things from him. On the field Stephen did not dissapoint at Summit, instantly making an impact becoming a starter on Varsity as a 10th grader. During this time, Coach Darnell Pugh of Summit took Stephen under his wing, mentoring him and being someone Stephen could talk to. “We are so thankful for Coach Pugh being there for Stephen, it means alot to me , what he has done to help my son”, says Stephen’s Dad.

As Stephen’s 10th grade season came to a conclusion under Head Football Coach Nick Matheny, his incredible talent began to catch the eye of college coaches. Working with Armond Hawkins Sr. in his Ground Zero organization, Stephen grew as a player and was offered a full athletic scholarship to USC in the spring of his 10th grade year. “The first time I got a call at work that Stephen had received an offer of a full scholarship I broke down and cried”, says Shonnda. By the beginning of Stephen’s senior season offers began to come in from the best colleges in America, all wanting Stephen to play for them with his explosive running style and vision. With a deadly combination of size and speed, Stephen is a rarity.

With Stephen’s senior season approaching the stage is set and he is ready. Ready for his father, now home, to see him play in person as a high school athlete for the first time. Ready to show everyone that he is the #1 high school running back in the nation. Ready to lead his team this season back to the playoffs. Most importantly ready to help others and give back. “From his family, to his friends, to his teammates at Summit, and with Ground Zero Stephen just loves to help people”, says Shonnda. Through it all, Stephen has remained the same and not let his 5 star ranking or new fame change him. He simply just keeps working and keeps it rolling, the same way he always has cool and steady.