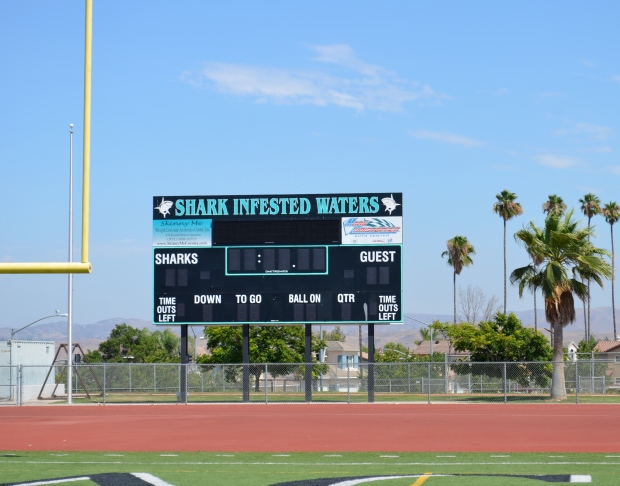 Last Friday August 30th, Fox Sports West televised a well known California high school powerhouse Hart High versus a lesser known Santiago High of Corona. It was the first time that the Santiago Sharks had been on Fox Sports and to create added excitement for Santiago it was a home game. The game was hot and humid with the field temperature well over 90 degrees at night. Anytime an Inland Empire school is on television they represent more than just a school but an an entire region and the credibility of its caliber of football.

In a high scoring game, Hart jumped out on Santiago and looked to be on its way to embarrassing the Sharks at home and in front of many more on television. What transpired for the rest of the game was a gritty performance by Santiago,  that will without a doubt be a factor in CIF this season and a “coming out party” for Santiago’s junior quarterback Blake Barnett. If you didn’t know who Blake Barnett was prior to the game, he had better be all over your radar from this point on.

Santiago proved not only that they are the real deal, but it was a BIG statement about the depth of Inland Empire football with them being in the same league as Corona Centennial. While a win is always better than a loss, this loss was also a win!